So what can you expect with our Wimbledon free betting tips? Not only will we be discussing our tips and predictions, we’ll also share our top recommended providers.

We’ll also share the best bonuses to take advantage of for your Wimbledon bets, including the latest Betway $200 bonus! Definitely not to be missed.

Canada’s love of tennis would appear to be on the rise. In recent years the emergence of Canadian players such as Milos Raonic, who reached the Wimbledon final in 2016, Félix Auger-Aliassime and Denis Shapovalov in the men’s game. And Eugenie Bouchard, who lost in the Wimbledon final in 2014, and Bianca Andreescu in the women’s game, has prompted more interest from Canadian TV audiences and those betting on the sport.

With those players on the march, it is not unusual to see that free betting tips for Wimbledon in Canada can help to turn your passion for the sport into a lucrative pastime. Canada’s wait for a Wimbledon singles title goes on, despite having come close in both the men’s and women’s draw. But if you follow the latest Wimbledon betting tips you will make sure you have two things to celebrate when a Canadian does eventually end that wait.

Wimbledon was the first of tennis’s grand-slam tournaments to get underway in 1877, with the US Open starting four years later, the French Open in 1891 and finally the Australian Open in 1905.

The championships last two weeks and take place at the start of July each year. The total prize money on offer at Wimbledon in 2019 totals an extraordinary £38m, with the men and women’s singles champions each winning £2.35m. More than 600 players compete across the men’s and women’s singles, as well as the men’s, women’s and mixed doubles for a total of 675 matches. With tennis now the second biggest sport to bet on behind football globally, it is important to understand the kind of bets and markets available during a tournament like Wimbledon and how you can capitalise on the opportunities. Here is a short guide on how to use Wimbledon betting tips.

There are a number of factors to consider before placing a bet at Wimbledon. Each of them will impact on the result and odds, on offer. Here is a quick guide to a few you should consider with your Wimbledon tips:

Head to head versus opponents: Sometimes in tennis, specific players struggle against certain types of players and even certain opponents. At Wimbledon, this is particularly true, with left-handed players being particularly awkward to play against on grass courts because of their sliding serve which slices away from their right-handed opponents. There can also be individual opponents which some players have a mental block against, and despite being ranked much higher, they struggle to beat them. For a long time, Rafael Nadal struggled desperately against Novak Djokovic. In 2011, he lost five times to the Serbian, including in the Wimbledon men’s final. Nadal had gone into that match on the back of a 20-match unbeaten run. Our Wimbledon free betting tips will help you out in anticipating this kind of event.

When it comes to the best Wimbledon betting offers, what else do you need to consider? Well, The Wimbledon schedule can be a brutal one for the top players, as to win they need to play seven matches in 12 or 13 days and they will impact on where they rank in the best Wimbledon betting offers. Much can also depend on how tight the matches are, and the duration of a player’s previous match may affect their ability to perform in the next round. In the 2010 Wimbledon, John Isner and Nicholas Mahut played out the longest match in the history of the sport, Isner taking more than 11 hours to beat his French opponent. Because of fatigue, he lost his next match without much of a fight against an opponent he would normally have beaten. Our Wimbledon betting predictions will help you spot when this could happen.

When it comes to analysing Wimbledon betting lines, it is also worth considering the playing surface itself and the players who play best on it. Wimbledon is unique when it comes to the Grand Slams because it is played on grass. The Australian Open was also played on grass courts until 1988 when it switched to hard courts, like the US Open. The French Open is played on clay. The surface has a big impact on the Wimbledon predictions as some players prefer the speed of grass over the slower, more demanding rhythm of clay and that will impact the betting lines as a result. Good examples include Goran Ivanisevic, who won Wimbledon in 2001 but failed to get beyond the semi-finals at any of the other Grand Slams.

Our top 3 providers for Wimbledon betting in Canada

What about making the best Wimbledon tips? Well, you have already seen it is important to consider a number of key factors, and another to include is the London weather. With the introduction of the roof on Centre Court and Court 1, rain breaks and disruption to a player’s rhythm is less of a factor, but when it comes to the best Wimbledon predictions, it is still worth considering the forecast if your player or match is drawn on an outside court. Before the Centre Court roof was installed, singer Sir Cliff Richard famously entertained otherwise miserable crowds on centre, during a prolonged rain break.

There are a wide variety of bets on offer at Wimbledon, many of which you will loosely recognise from other sports such as football but they are, of course, adapted to tennis. Here are some of the bets to look out for, once you have reviewed your Wimbledon betting predictions.

Getting it right when it comes to the big games at Wimbledon requires a combination of knowledge, research and good fortune. Here are a magnificent seven Wimbledon betting tips. 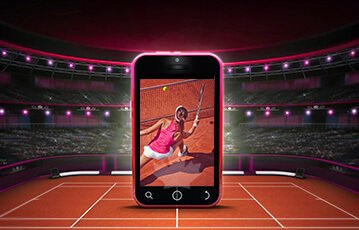 Some of the most incredible long-shots have won the Wimbledon title, particularly in the men’s event. In 1985 an unseeded 17-year-old from Germany stunned the tennis world by winning the most famous tournament of them all. Boris Becker won the Wimbledon title again the year after, but this time he was the favourite even before the tournament began. In 2001, Ivanisevic was ranked no 125 in the world and failed to qualify for Wimbledon. The Croat had won only nine matches in the six months before the tournament and yet he was granted a wild card place in the draw by the All England Club because he had shown, in reaching the final in 1992, 1994 and 1998, that he could produce the goods when it mattered. In 2001, Ivanisevic did just that, beating Australian Patrick Rafter on the third Monday of the tournament to make Wimbledon history. With Wimbledon free betting tips, you might be anticipate these kinds of events.

The greatest players – men and women – of various generations have almost always risen to the occasion at the All England Club. In the men’s game, one name stands out above the rest. The Swiss Roger Federer has won an incredible eight men’s singles titles, setting a record that may never be beaten. He stands just one victory ahead of the American Pete Sampras who won seven singles titles in eight extraordinary years. Bjorn Borg, of Sweden, won five consecutive Wimbledon singles titles during an era when he traded blows with the mercurial John McEnroe. In the women’s game, there have been some extraordinary champions. The greatest is arguably Martina Navratilova, who has won nine Wimbledon singles titles – more than any other player in history. Steffi Graf, the German player, won all but two of the nine finals she competed in, while Serena Williams has also won seven Wimbledon titles.

Finals weekend at Wimbledon is a special time to be at The All England Club. With very few matches taking place on the outside courts, the crowds are down from the previous week and there is a little more room to breathe around the fantastic grounds. Women’s final day has seen some special moments over the years and we’ll give you some great Wimbledon betting tips and predictions for this. Who can forget Navratilova’s famous victories, Jana Novotna’s tears and the energy, grace and sheer talent the Williams sisters have shown over the years?

Betting on Wimbledon is an exciting, dynamic way to follow the greatest tennis championships in the sport. If you can access Wimbledon betting tips and combine that with your own knowledge and homework, then you do have the opportunity to make a series of wagers across a huge variety of markets and turn your interest in Wimbledon into money. The key with betting on Wimbledon is to understand the many different factors that impact the odds and the likelihood of your player or outcome coming good. The conditions at the All England Club are unique in grand-slam tennis and the players who do well at Wimbledon are not always the players who succeed at other tournaments. So do your homework, examine free Wimbledon betting tips, bet carefully and good luck.

At Wetten.com we will find you a bookmaker that covers everything from the Europa League to the US Open. When it comes to the Wimbledon championships, we are the best at keeping you in touch with tips for the biggest names and matches in this truly historic competition. With our recommended bookmakers you can place a range of bets on a variety of different markets, including outright match wins, most aces and in-play betting. So, register with our recommended bookmakers and get ready to turn your  Wimbledon betting predictions into winning bets.

Previously, it has been played with a soccer ball. Canada's connection with ...

At Wetten.com, it’s our prerogative to offer you the latest greyhound racing ...

Looking for the latest NBA betting tips and predictions? This guide will ...

This is the place to come for UFC free betting tips Canada ...

Move to Top
×
Your Bonus Code:
The bonus offer of was already opened in an additional window. If not, you can open it also by clicking the following link: